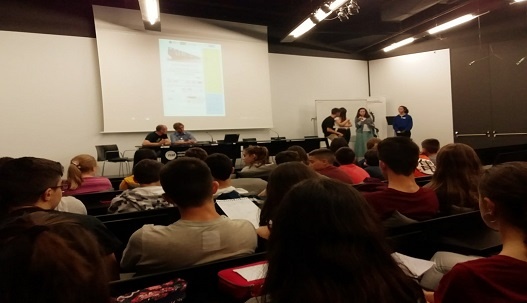 On May 23rd, we had the pleasure to actively participate at the “V Congrés de Joves Científics i Científiques de Catalunya 2019”, an initiative promoted by the “Museu de Ciències Naturals de Barcelona” and the “Institut de Ciències de l’Educació UAB” The main topic of this year was “Water and polluting agents”, an extremely important issue, considered by the United Nation as one of the sustainable developing goals.

For an entire day, around 160 students from different institutes had the opportunity to dive into the scientific world and experience with their own hands what does it mean to be a scientist. The young scientists belonging to four different schools (Dertosa in Tortosa), La Garrotxa in Olot, Montsuar in Lleida and La Salle in Barcelona participated in workshops, research activities, and finally presented their studies and the resulting conclusions in the afternoon conference.

During the morning, the largest group of students participated in workshops focused on physics and robotics innovation, while another group of students, which were “the researchers”, had to face an environmental challenge focused on water quality. The researchers analysed water quality using an experimental approach in order to compare high-quality water with poor-quality water. Following the scientific method, the young scientists, accurately annotated all the results, which they gathered from their experiments and, as real research scientists, extrapolated the conclusions. Finally these conclusions were shared, discussed and compared among all the groups.

The afternoon conference was the moment where all the hard work and all the preparation done during the previous sessions was shared among all students. This moment was truly important because allowed the young scientists to breathe other important aspects associated to scientific research, such as communication and dissemination for the wellbeing of the society!  Science goes beyond experiments or the laboratory. It is part of society. Its biggest mission is not only to make new discoveries but it aims to bring knowledge to society by communicating new findings and understanding both environment and people needs.

What can we learn from polar bears fur?