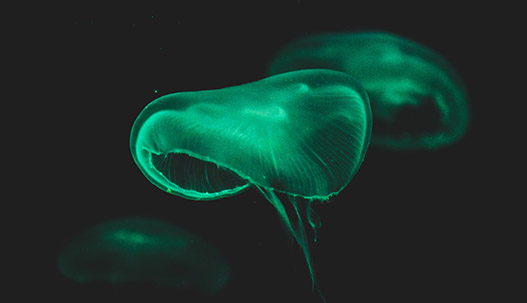 One of planet Earth’s most fascinating phenomena is the ability which some organisms have of lighting up their organic tissue. A common case of this is that of fireflies, although many of us may have encountered the phenomenon in which the sea can be lit up at night by millions of phytoplankton that live inside it. But although we may have heard of such occurrences, or even seen them ourselves, the mechanism behind it may surprise us.

So what is bioluminescence?

Bioluminescence is a chemical process in which luciferase proteins oxidise luciferin molecules, producing oxyluciferin as a result. This chemical reaction releases energy in the form of light. This apparently extraordinary phenomenon is in fact rather common; however, it usually occurs at great underwater depths.

In fact, this mechanism is the primary source of light for many deep-dwelling species. It is thought that approximately 76% of marine species are bioluminescent, with as many as 90% living off the phenomenon. This applies to around 1,500 different species of fish. Additionally, there are species that do not bioluminesce themselves, but carry bacteria that do, thus allowing for a symbiotic relationship to emerge between them. Among the many uses which organisms may apply their bioluminesce to are:

-for defense against a predator: the bioluminescent organism can startle, distract or repel the predator;

-camouflage: the prey uses bioluminescence on its underside so as to blend in with the daylight when seen from underneath;

-to attract prey: the predator can trick its prey using light as bait, it can find the prey in the darkness, or it can stun it;

-to call a potential mate: species use bioluminescence to signal their availability to reproduce.

These chemical processes can often even be regulated by the carrier depending on its needs, with the organism regulating the colour and intensity of the light it gives off.

The vast majority of bioluminescence found in the ocean deep tend to be blue or green hues, since they are more easily visible at great depths, where it is hard for the rays from the sun to penetrate and warm colours are off the visible spectrum. In fact, red is so scarce that many marine species have evolved without the need to perceive the colour. Even so, there are certain animals that take advantage of this fact to ensure their advantage of others: by emitting an almost invisible reddish hue, they luminesce and illuminate their prey without being detected. One such fish belongs to the genus Malacosteus. Furthermore, among ray-finned fish (Actinopterygii), a class of bony fishes that makes up as many as half of all vertebrates on the planet, the bioluminescent trait has gone through approximately 27 evolutionary processes. But perhaps the most interesting fact is that, because of the broad variety of species that employ bioluminescence for their vital functions, bioluminescence may constitute the most extensive form of communication in the world, given that it is used from the bottom of the ocean to the water’s surface, as well as on land.

Nature for the survival of our species